The Agricultural activities are an integral part of Evia its culture, its history and its people. The island’s economy is based, throughout the centuries, on the fertile land where until today are grown olive trees, vines, citrus, vegetables, nuts and a healthy livestock population. To olive oil, wine, grapes, honey and citrus are added vegetables; the temperate climate of the island allows the production of plant and animal foods with special nutritional values. 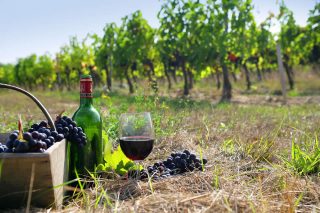 Wine is an integral part of Greek culture. There are many references to the cultivation of vines and winemaking since ancient times; some old varieties still grown today in the same soil using sometimes almost the same production process.

Almost every Evian house has its own house wine. The care of the vine after the harvest begins with the basic pruning. The main pruning is done, depending on the region and altitude, in January or February, following milling, tipping of shoots, sulfuration, and perhaps thinning of the grapes.

The ripening and harvesting take place depending on the variety and altitude of the region from the first ten days of August until the beginning of October. Until then, the vine requires constant supervision and work on preventing from various diseases.

The harvest offers a social dimension, a typical picture of rural life in Evia; from dawn friends and relatives tartar and carry grapes. When the harvest is over, the grapes are pressed in the winepress or motor, or sometimes even by foot and produce a “must” followed by the time of celebration. All sit around a rich table with the best wines of the house and toast the owner. The fatigue of the day turns into singing and dancing.

The Figs of Kimi 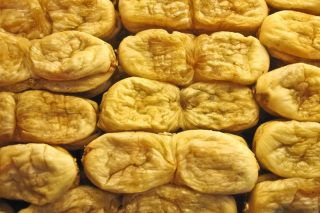 Figs are one of the favorite summer fruits of Mediterranean peoples. The harvest period begins from late July through August and September. Of course, one can savor them throughout the year if dried; an important food for the winter and a perfect choice as a snack. The figs in antiquity related with the cult of Demeter and Dionysus were a staple food during the dinner of the ancient Athenians. Dried figs are rich in vitamins A, B, C and minerals like calcium, phosphorus, potassium and iron.

The fig of Kimi is a unique product, recognized by the European Union as a product with Protected Designation of Origin. It is traditional and produced exclusively in the area of Kimi by Law.

Production The production process of the fig of Kimi starts the first ten days of August and ends in late September. The fruits are harvested from the tree in overripe condition and placed inside wooden frames (frames). Those intended for white type, they are processed in special chambers (furnaces), using sulfur vapor.

The figs are then torn, opened and placed in wooden frames and placed under the sun. The Figs are exposed to the sun for 4-5 days until they are dry. After the drying process is complete, both types are packaged and the end product is called “askada”. The product in its final form is placed in plastic boxes of 25 kg and placed in storage. At this stage, quality control of the product is divided into categories. The packaging is done by hand, because of the delicate nature of the final product without using preservatives, so that the Fig of Kimi remains always a natural product and justify its peculiar character.

One of the most important cooperatives located outside Kimi in Mentouli (tel .: 2222031722 e-mail: figkimi@otenet.gr). Founded in 1980 and consists of about 800 members from 22 communities in the region Kimi, S. Evia. During its operation, it contributed to the economic and social development of the region, creating new jobs. The basic functions of the cooperative are the assembly, processing, packaging and distribution of the product on the market. 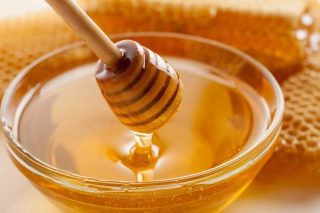 Evia is a place rich in native plants, such as thyme, sage, oregano, pine, acacia, strawberry trees, eucalyptus, and citrus fruits. A particular plant is kisouri or briar.
A bushy shrub with lush flowering in autumn; its flowers are numerous, small, bell-shaped, rosy in long inflorescences. This plant is regarded as a magical beekeeping plant in Greece. The processing of this Euboea honey is done naturally without high temperatures which destroy its vitamins.

Nowadays, beekeepers move their hives to different flowering spots each time. In early spring; to orange groves and generally at low altitudes to collect nectar from flowering plants then later on in the year, they move them to higher altitudes to flowering spots with aromatic plants and herbs like thyme which gives the unique characteristics of the honey.

Kisouri begins flowering in August, then spreads out to lower altitude in December. Early autumn rains favor its flowering, but in order to give the plant rich amounts of pollen and nectar, the weather must get warm or even humid southwest cool winds. It is considered an excellent beekeepers plant and “reikomelo” is considered one of the best honeys.

In recent years, the nutritional value of this honey has been greatly appreciated which explains its very high prices in health food stores. It is an excellent type of honey for children and seniors. A small amount of honey is enough to rejuvenate a person. “Reikomelo” has the unique ability to lower cholesterol. Scientific research shows that honey displays antiseptic anti-inflammatory properties, especially for the urinary and digestive system. Its odor and taste is characteristic which appeals particularly to discerning consumers.

It has a dark color and after crystallization turns to a reddish appearance. In France, chestnut and lavender honeys are considered one of the best French honeys. The French produce only with this honey French gingerbread.