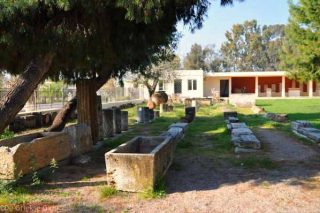 This is the museum of one of the most important cultural centers of ancient Greece. You will have the chance to see findings from all around the island and from all periods, chronologically ordered, starting from the Bronze Age. Jewelries, potteries, sculptures, reliefs, lamps and weapons will take you on a journey through time. Every visitor is impressed by the sculpture depicting the amazon Antiope and Theseus. This complex was found in the western pediment of the temple of Apollo in the city of Eretria. One of the rare exhibits that you will see in this museum is the bronze horse blinder, upon which is scribed a plan of the entire northern Syria; a real masterpiece. Exhibits are to be seen all around the museum, even on its yard. The museum also hosts many findings from cemeteries of the region, like objects from the private, public, athletic, worship and funeral ceremony of the Classical, Hellenistic and Roman periods. 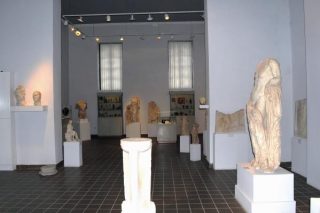 Housed in a neoclassical building, first time opened in 1960 to 1981, and was closed due to the damage caused by an earthquake, and reopened again in May 1991. The outer face of the building is divided by the ashlar, the polygonal base of the building. There pediment in the center of the facade. The building is tiled. The exhibits are dated from the Paleolithic to the Late Roman period from excavations in Evia.
The collections of the museum among others include: 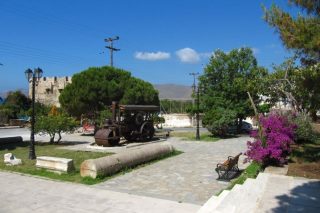 Housed in the western wing of the Yiokaleion Foundation building, (legacy of the benefactor Nikolaos Giokalas – built on Maximilianou Square in 1959) the building also houses a library and a theatre hall.
The local archeological department organizes guided tours of the Archaeological Museum, while both the library and the theatre operate under the supervision of the municipality of Karystos.

The archaeological collections include: 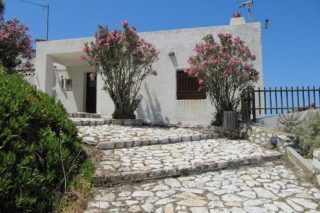 The two halls of the museum display exhibits that come from various archaeological sites on the island and date from the Protohelladic period (2800-1900 BC) to the Roman era.

The museum displays many collections:

Co-housed with the club ”Friends of John Skarimbas” located at 3, Kakara str., the museum hosts the jackass stunts, painted himself and bought twenty years ago by the Prefectural Committee for Adult Education (PCAE), along with paintings, photographs and a library that includes books written by J. Skarimpas and other books written by others on J. Skarimbas. In the museum there are also personal belongings of John Skarimbas eyeglasses and manuscripts.

Inaugurated in September of 2006 in Kerassia Northern Evia and housed in the wealth of paleontological excavations in Kerasia. Excavations in the territory discovered fossils of mammals which lived in Evia more than six million years ago according to professors of the University Athens. These findings are properly maintained by the University of Athens, presented for the first time publicly in an original manner. The collection of the museum includes exhibits of:
Fossils – mammal – invertebrate Fossils, Rocks, Archaeology.

The History and Military Museum was created in Kontodespoti village in the centre of Evia, with the initiative of Anastasio Liaskou former MP of Evia; this private collection which is not just Evian but from throughout Greece. Such artifacts are found at the National War Museum and its annexes too. Among the exhibits are: Weapons that were used in all historical moments that Greece had military entanglements; Weapons of various armies of the world. Photographic war record and several other related items.