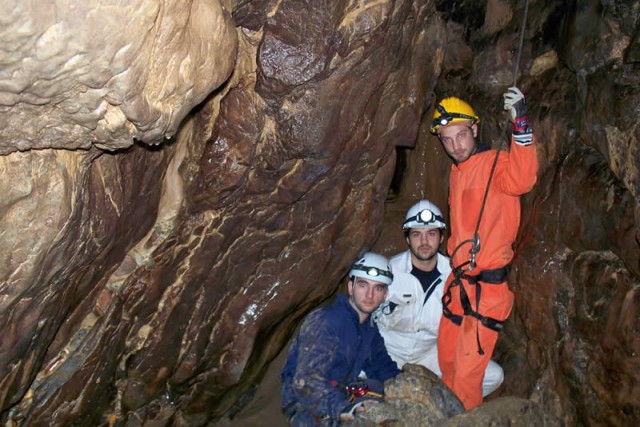 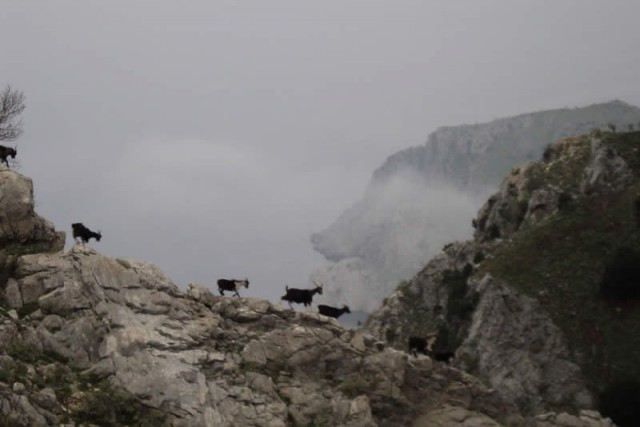 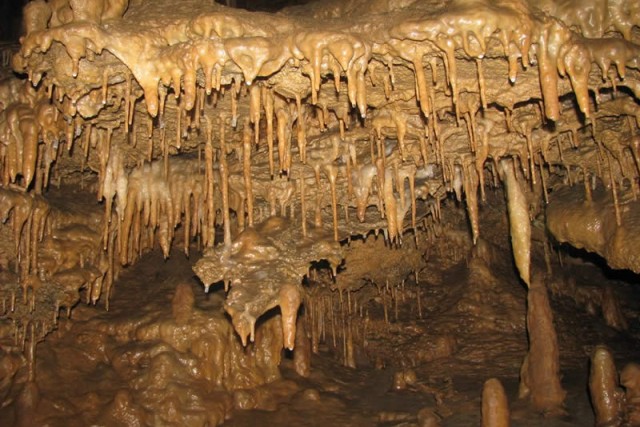 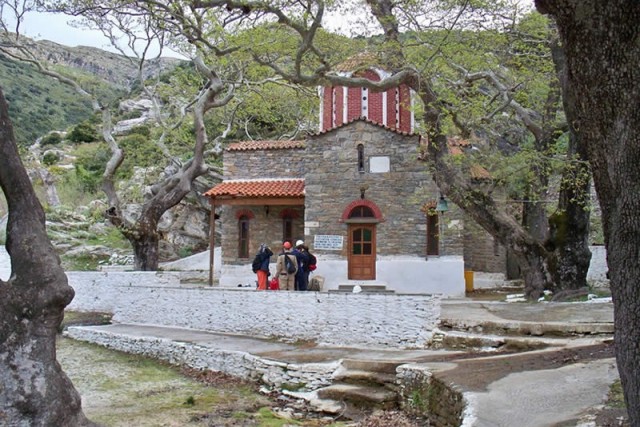 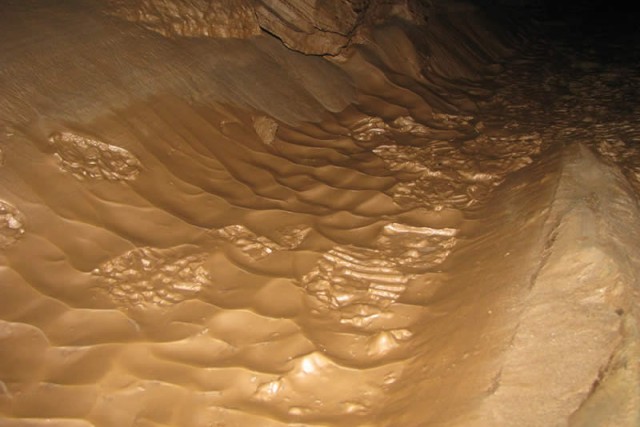 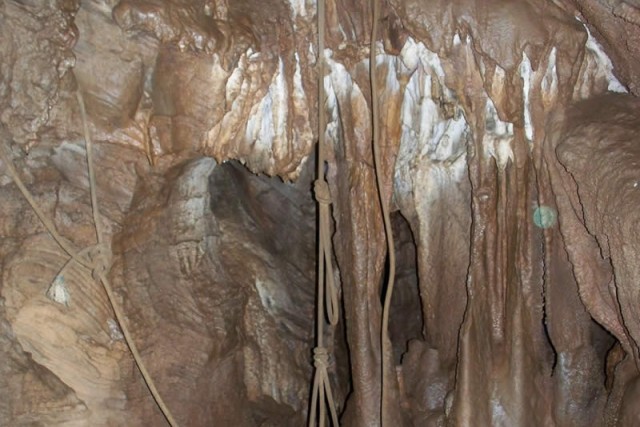 A twenty minute walk separates the elementary school of Kalyvia from the cave of the Holy Trinity, where they have found remains of Neolithic inhabitation. Through the oak tree forest emerges the church of the Holy Trinity near the always running source. A path leads to the entrance of the cave where special equipment the exploration adventure may begins using special equipment. It is the largest cave in southern Evia (2,400 meters of explored distance).

The cave is known since ancient times, first explored in 1932 by the group by the name “Outdoor Life”. One of the most famous explorers of the cave was the climber – cave-diver Vangelis Vourtsis. The exploration is divided into four sections. The first section goes down to 420 meters deep, at 150 meters further down, is a chamber in which is a water waterfall 30 meters high. Nobody knows where the cave of Aghia Triada ends. Hopefully one day some courageous cave explorer will eventually solve this mystery.

The Cave at the Gorge of Neleus (Arapi)

During the Turkish occupation it had become a refuge for the local residents. Locals built their own secret paths and used the small cave which exists in the gorge to hideout. In the summer of 1823 the residents trying to escape the fury of the Turks hid and locked themselves inside to cave. After the Turks discovered this hideaway, they lit a huge fire at the entrance of the cave causing the residents to all die from suffocation.

Tharounia is a picturesque mountain village, built in the canyon of the river Cartilage, north and west of Partheniou Trachnliou. Built in 1666 by the remaining inhabitants of the old village Kaki Petra it was wiped out by plague. The ancient name of the village was Charoneia related to the caves and the general configuration of the ground, which had a connection with the deities of Adon Charon and Pluto. From these Charoneia paths it was believed the road leading to Hades began.

The presence of the human factor in the region is already attested as early as the Neolithic period mainly inland and namely from a cave near the village. It is a dark cave, located in Kakalitsa, on top of a limestone mountain at 440 meters high. The cave was discovered in 1974, it has impressive decor and was explored by the physician researcher and author Theodore Dark. Inside was discovered fauna of the Pleistocene period when man lived during the mid Paleolithic period and hunted wild prehistoric animals. Animal bones were found including and a fossilized femur, belonging to Imiorthio Elladopithiko, who lived one million years ago. In the cavities of the rocks they discovered traces of fire from caveman and even items of worship (vases and terracotta figurines), which indicates that the Cave of the Dark was for some time a place of worship and a burial ground.

The excavations of 1986 brought to light numerous findings from the period 5300-3400 BC and two human skeletons from the Neolithic period. Impressive is a rare fabric imprint or embroidery on a shell, and various basket weave imprints at the base of large unpainted vases, but beyond the findings within the Dark cave, findings are located in the wider area of the village. Many of these findings can be admired in the Archaeological Museum of Chalkis.

The Caves of Kimi

The area of Vromoneri, Mtohiou and Eptaou is one of the unique areas in Greece with many interesting caves. For 22 years (1987 to 2009) efforts, comments, notes and especially the exploratory “passion” of numerous (over 60) Greek cave explorers, British and Czechs demonstrated that Kimi is not only just the harbor, picturesque village and beach. The area of Kimi is the mainland countryside with its mountains, hills and rugged cliffs. There lies an impressive geo-relief with peculiar rock formation, a remarkable flora -bed and the hills, a purely local climate type where winter mainly leaves its mark deep into the sensitive limestone.

Caves and underground tunnels, hydrographic networks, have been formed over the course of millions of years, through which the abundant rainwater from the hills flows down to the sources as well as Kolethres. The study and research of these caves answered many questions, as each cavity is a complex ecosystem which contains information even before human existence. Finally, the caves are related to folk legends, myths and traditions, and some of them have been converted to chapels. The main system of underground drainage: Dark – Mesovouni-Vlachovouni-Pirneri seems to be a natural network of tunnels with apparent main entrances and at least five basins and a major visible exit.

In Lakka (Basin) Vromoneri, the main source is inaccessible to cavers; the small cave of Skulls, which identified by half buried human bones and skulls and finally, Chionistra, an impressive precipitous remains snow on the bottom until August. Metochi, dominates the impressive underground relief and depth, but a humble entrance. In the deep Lakka, under Pirneri and between Cheloniari and Huddle, though the unexplored there is no evidence for inclusion of the basins. Papaspiliou: between Plakera and Fterolakka.  Since 1987 they have explored a depth of 245 m; until the siphon and precipitous descents down to 100m: Kolethra Metohija, 2 km. SE of Metohija. The impressive entrance of the cave system was first explored in 1989 by the Czech cave divers who were assisted by Greek colleagues.

The SPELEO, passes further the known terrestrial part, and discovered a new cave very close, which probably is part of it. Kolethra is highly likely connected to the Lakka’s Tsekoura. The caves and abysses or natural wells, most easily accessed are: The holy water cave under the source of seven with a depth of 20 meters. Where inside is a small shrine. The Lachanolakkos the northeast foot of the Dark Cave has the following mysteries:

The Hole of Roubi: a 73-meter chasm; an almost vertical elliptical entrance. Koumiotikes snow crystals; these caves with krystallochiono for mapping purposes are numbered from B1 to B12, while some used local aliases. The Gulf anticline, the configuration of the Limestone (anticline) input, the Gulf of unknown speleologists: found anchors from previous cave explorers visits.

In Attali – Central Evia: a Cave characterized for sinking a few centimeters every year.

Only locals of Attali, or even from the nearby village of Platanos and Makrykapa know its existence, although it is the largest cave surface of Evia. Located at the entrance of a canyon northwest of Attali, with its huge hall, it is an ideal prehistoric habitation site. It promises many surprises to potential archaeological and general scientific research. The Attali cave or otherwise known as Kakavou, is superficial, as other known in Evia and, as far as we know, no other surface cave so great. Its width reaches 30 meters and length 40 meters, while the height almost 10 meters.

The floor, which is smooth in the most part, inclines outwards and parts of it are covered by calcareous cave deposits. In many parts of the roof hang small stalactites but one distinguished remains of larger stalactite, which unfortunately have been destroyed by human hand. On the walls are various stalactite formations, especially vertical folds (“curtains”), smaller or larger holes (“keyholes”) with beautiful water streak patterns on the surface of the rock.

It is said that once – unknown when – in the depths of a cave passage, there was the beginning of a tunnel which continued into the mountain, now blocked by calcareous deposits. Locals say also that in very remote times there was a chapel inside the cave.