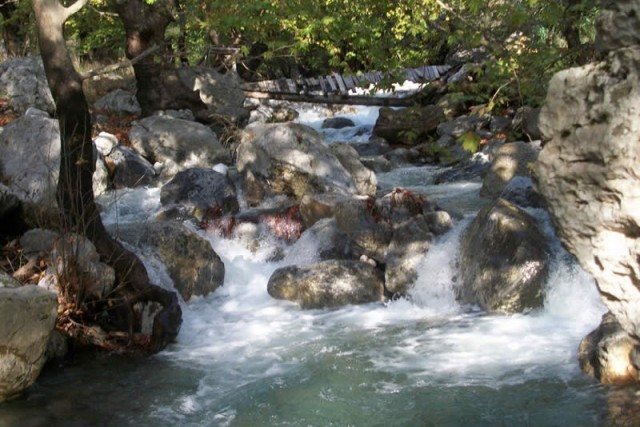 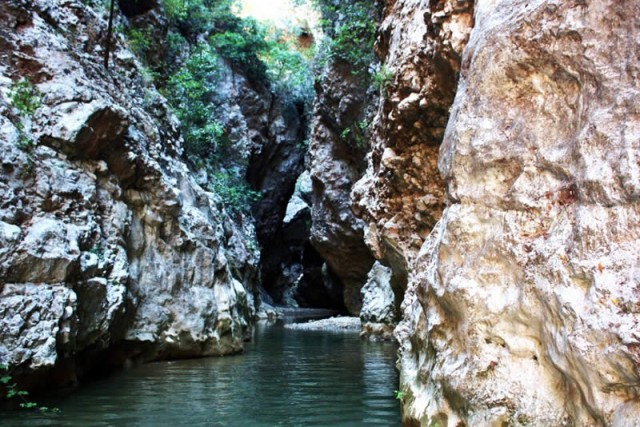 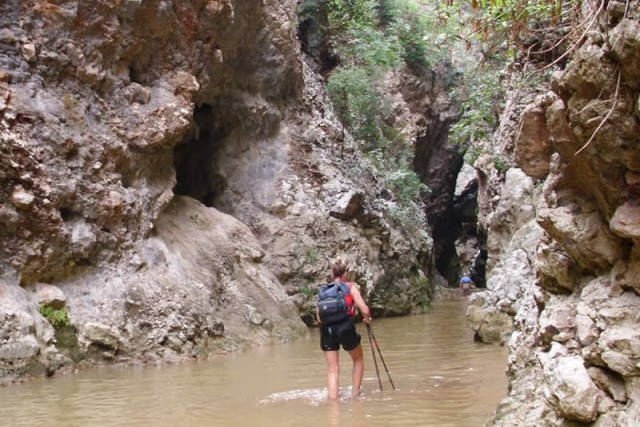 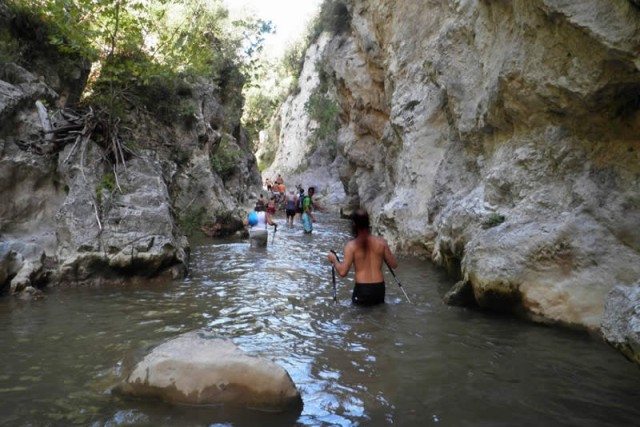 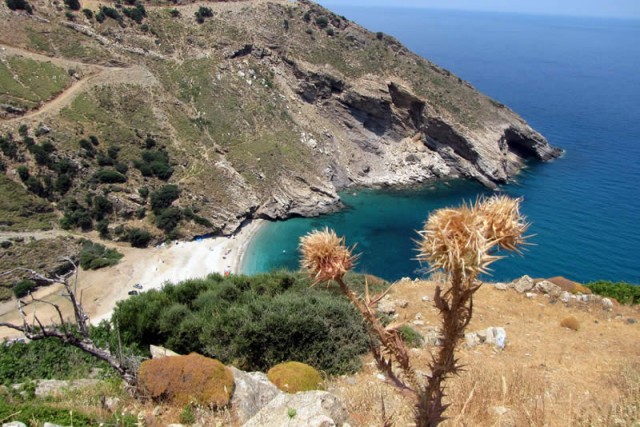 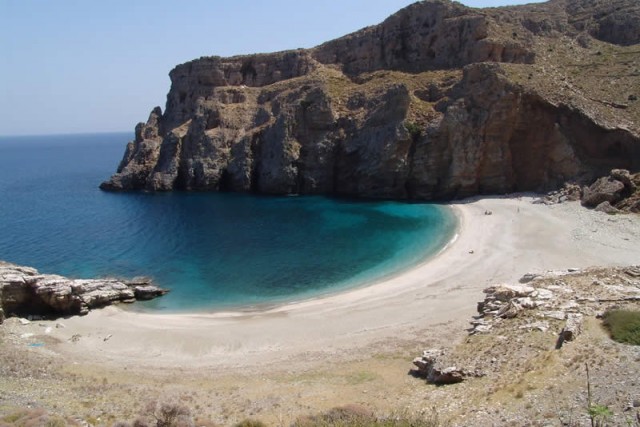 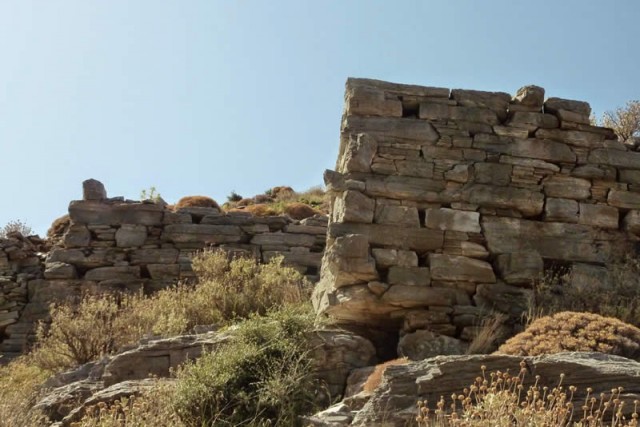 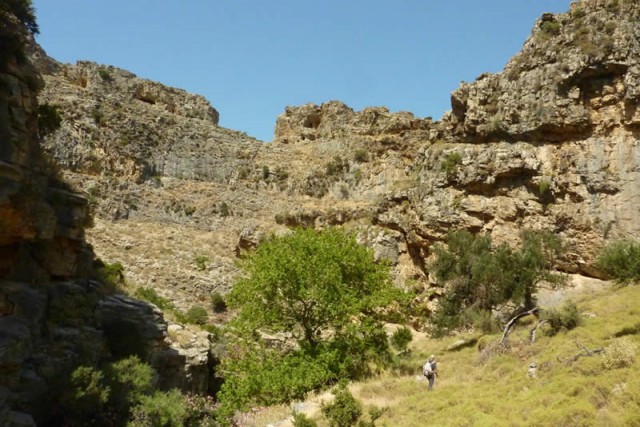 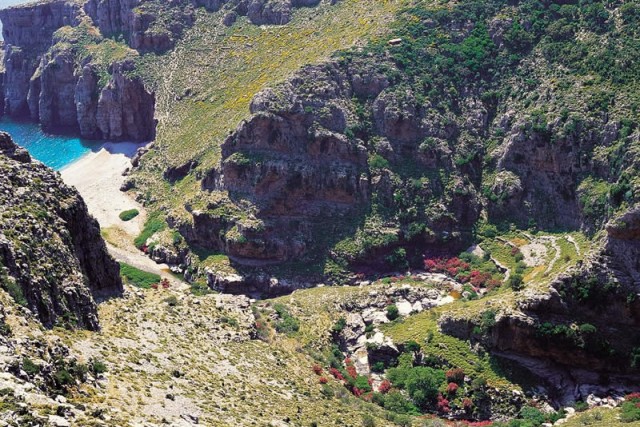 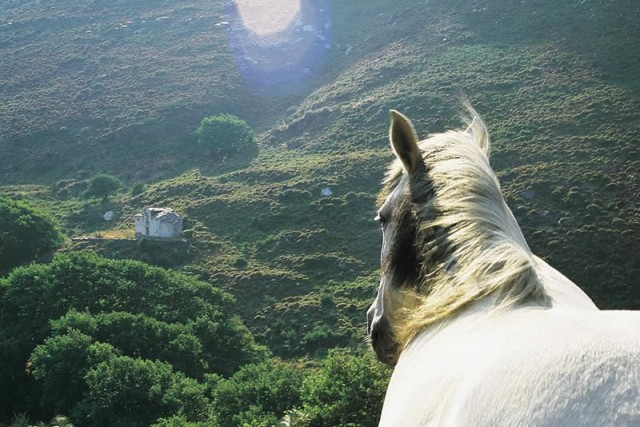 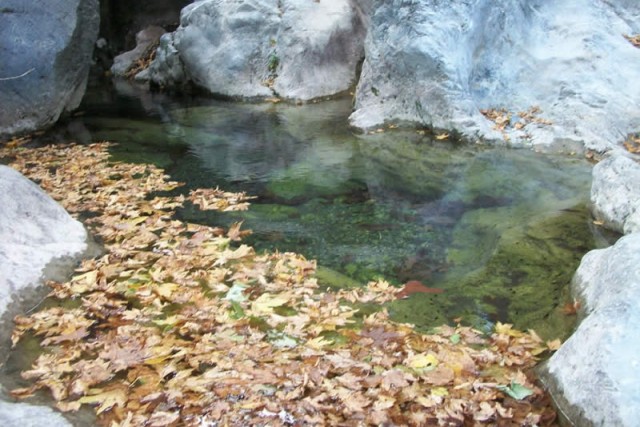 Dimosari’s Gorge is located in southern Evia, on mount Ochi, begins at an elevation of 1386 meters and end at the Aegean sea, at Kallianos beach. It is definitely one of the most beautiful hiking trails in Greece, if not the most beautiful. It is 10 kilometers long, divided into two parts.

Village Lenoseoi is located somewhere in the middle of the gorge. Above the village, the gorge is wild and some parts of the trail are steep. Under the village and till its end on the sea, the gorge seems more like a valley, going parallel to the river. The gorge ends up at Kallianos beach, on the side of the Aegean. It’s even said that, during the archaic and classical period, metal mines were located on the gorge, on the direction towards Kallianos area, as rust has been found on the beach and the most southern part of the gorge. You will become a witness of the great history of the canyon, with the dragon houses, the medieval cobbled streets and the fossils at several points.

Many lush bushes and trees, chestnut trees and plane trees being the dominant element, a variety of birds, including owls, eagles, buzzards and nightingales, and many other animal species are going to fascinate you. This gorge is one of the most beautiful places in Greece, highly suggested for lovers of natural beauty and photography, as interchangeable images, colors and flavors of Greece complete the landscape.  You will enjoy the flowing waters, waterfalls, rivers, uncountable animals, trees and flowers everywhere. Don’t miss it!

There are signs along the path and it is fairly easy to walk through it, however it is not for inexperienced walkers. This is why it is advised to make it a daily, or even a two-day excursion, spending the night at the existing shelter.

Agios Dimitrios gorge is next to Dimosari gorge. Ιs an impressive limestone gorge in the Ochi area. It begins at the homonymous village Agios Dimitrios and ends up in the area Kalergou or Skinodavleia beach, depending on the path you choose to take.

You go downhill from Kalergou settlement, to follow Demosaris gorge and reach Kallianos beach. Flora and fauna are exactly the same with the rest of Dimosaris gorge. You’ll see oak trees, small waterfalls and wild birds everywhere around you. There is even a third path over the village of Agios Dimitrios, leading to a huge valley full of oak trees and chestnut trees. This path is really wonderful and reaches the peak Boublia; a great variety of colors and images, with green trees and gray marbles on your way to the top.

From the top you will see the two canyons with their valleys, magic sounds and smells. On the sides of the gorge grow rare rock-friendly vegetation. The gorge af Aghios Dimitrios is also one of the most important areas in Euboea for birds of prey. Here live, or fly by, rare birds of prey, such as the Hieraaetus Fasciatus, the peregrine, the female falcon and the golden eagle.

If you’re lucky enough you’ll even see eagles opening their huge wings. No matter which path you may choose, you won’t forget it!

Archambolis Gorge It’s located on the northeastern side of Mount Ochi. The gorge has steep vertical cliffs and small caves that create an imposing feeling. You will also see ruins of the walls of the ancient city, dating back to the 6th century B.C.

Researchers have found out that this was a quite an important city, as it had an acropolis and a temple, its own harbor and metal mines. The gorge was named Archambolis by the words “archaia polis” (meaning “ancient city” in Greek). Descending at the end of the gorge you will reach a small paradise beach with crystal waters.

On this beach you will see small seals, if you are quiet and lucky.

The most passable gorge of the island is located on mount Dirfi, central Evia, with a length of 18 kilometers. You can reach it from the villages Agios Athanasios and Paliouras.

The path is bidirectional, meaning that you can go uphill or downhill. The passable route will let you enjoy the landscape, with paths formed to facilitate the hiker.

You’ll be charmed by the small paradise of natural beauty created by small waterfalls with flowing waters, fir trees and rivers.

Nilea’s gorge (other names: “Arapis” or Boulovinenas gorge) is located in northeastern Evia, between the villages Kerameia and Agia Anna. Nileas is the river crossing the gorge that was given the name “Arapis” (“black” in Greek) due to the black color of most of its river beds.

The gorge is 10 kilometers long and is quite rough, as you cannot cross it just by hiking, but also by swimming at some points. Homer has referred to the gorge and river Nileas. The cave of the gorge was used as a shelter of the locals during the period of the Turkish occupation. It is even said that a woman named Boulovinena came out of the cave and when the Turks found her she decided to kill herself, in order to avoid getting captured by them, falling in the gorge.

This is why many call it Boulovinenas gorge. It is one of the most beautiful gorges of the island, with great history, wild beauty, rich fauna and flora. You should get organized and swim across it.

The gorge of Manikion is located close to Kimi on the island of Evia. It is a place of unique splendor with striking natural beauty. The river Manikiatis flows through the gorge and is known since ancient times as Nedon. The river runs all year round.

The Manikiatis River joins the waters of the stream from the source of Kolethras and flows into the nozzle of Oxylithos. Soaring on the canyon are located the ruins of the castle of Dragonera. The first walls of the castle were built in the 8th century BC during which it was independent till the 5th century BC. Subsequently the castle was under the siege of Eretria.

Today only the ruins from the Byzantine period remain. In the castle one will find the church of the Annunciation, which is probably built on a temple of Artemis. In general, the gorge has no marked paths. There is a trail, which follows the riverbank till the exit from the gorge.

It starts just outside the village of Manikion located on the river banks.